KALAMAZOO, Mich.—Student clothing designers and fashion aficionados at Western Michigan University revved up their creative skills for a cause. The Merchandising Opportunities and Design Association (MODA) raised $2,000 for the Ford Warriors in Pink initiative with its Motown Fashion Show at the Gilmore Car Museum, supported by Seelye Ford. 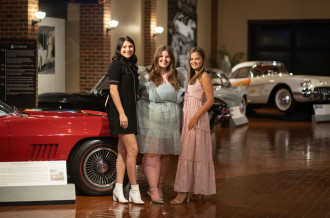 Erin Boismier, Samantha Morehead and Galina Roehl check out cars during the VIP event inside the Gilmore Car Museum.

“The show was truly magical,” says Samantha Morehead, MODA president. “It is the most rewarding thing when you pour countless hours over months of planning something, and you finally see it come to life in front of you and get to watch others enjoy and applaud our student designers.”

A sold-out crowd of 300 students, family and community members came out for the event, which included a VIP experience among the classic cars inside the museum. The entire night was coordinated and executed entirely by students.

“The audience absolutely loved it! Every model that walked out, the crowd cheered and applauded,” Morehead says. “It was a fun, upbeat atmosphere and audience members provided rave reviews about their experience.”

Six designers were chosen for awards at the end of the night, including:

“I’m just in awe of how Western and the opportunities I’ve had in the program have made me a better designer,” says Lekander, a fashion design student who will graduate in December. This is the second MODA fashion show she’s participated in, and this time she both showcased her own garments and played a lead role as designer chair.

“When I first transferred to Western two years ago, I didn’t have any background in fashion design or the industry aside from sewing commercial patterns in my room for fun,” she says. “But over the past two years, I found all these different outlets connected to the industry.”

The partnership with Warriors in Pink gave MODA an opportunity to get back to its roots; the organization was founded in 1998 by two fashion design students whose mothers both battled breast cancer. As a result, MODA’s first few shows in its early years also served as fundraisers for Susan G. Komen of Southwest Michigan.

“It’s special that this time around we could bring that back to MODA,” Morehead says. “My family’s been impacted by cancer since I started college, and I know what it’s like watching a loved one go through treatment and how hard it is. So being involved in this is really meaningful to me.” 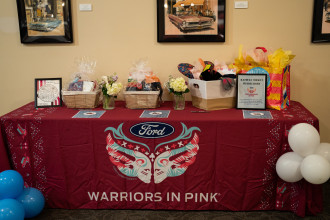 A raffle helped to raise money for both MODA and Warriors in Pink.

MODA began its partnership with Warriors in Pink in June 2021 when a recent alumna helped secure donations of hundreds of bandanas left over from the initiative’s fundraising campaigns for breast cancer patients through Susan G. Komen and the Pink Fund. Several student designers used those bandanas to construct their garments for the show. The focus on sustainability carried over from a fashion design course led by Dr. Mary Simpson, assistant professor.

“She’s really taking that sustainability element and doing ‘zero waste,'” challenging students not to throw away anything or purchase any new materials, Morehead says. “Any extra fabric they used outside of the Ford scarves was fabric they already had in their personal collections through designing other garments.”

Sustainability was also the focus of the most recent New York Fashion Week, which Morehead won the opportunity to attend in February through Western’s inaugural New York Fashion Week Competition. Grace Stibich, who won second place, will get her own behind-the-scenes experience at the event’s fall run in September.

“Joining MODA my sophomore year was one of the best decisions I have made during my college experience. MODA has allowed me to grow as a person and leader. I have been pushed out of my comfort zone and am a better person because of it,” says Morehead, who will graduate this month with a bachelor’s degree in marketing. In addition to her trip to New York Fashion Week, she has held two leadership positions and planned two fashion shows during her time with MODA.

“The memories I have made during my time in this organization I will forever cherish. I am so endlessly proud of the amazing experiences I have had in this organization, and I can’t think of a better way to say ‘goodbye’ following the absolute success of this year’s fashion show.”