Aldi operates some 10,000 stores in 20 countries. The Aldi Nord division is considered the largest grocery retailer in Europe with stores in Belgium, the Netherlands, Luxembourg, France, Spain, Denmark, and Portugal. It also operates Trader Joe’s markets in the United States.

The new Aldi Nord store in Utrecht is being outfitted with Trigo’s software and hardware solution and is set to open early next year, Trigo’s VP of Business Development Yair Holtzer told The Times of Israel in a phone interview on Sunday.

The pilot is expected to run for 12 months and marks Trigo’s entry into the Dutch market. The Israeli company already works with grocery giants Tesco in the UK and REWE in Germany, in addition to other not-yet-disclosed retailers in Europe that have implemented Trigo’s frictionless solution in select stores.

“Aldi Nord is a perfect partner for us,” noted Holtzer. “They are a large retailer with the capacity to run this kind of innovative project, and the ability to scale it.”

An Aldi store in Utrecht, the Netherlands. (Courtesy)

Founded in 2018 by siblings Michael and Daniel Gabay, Trigo uses computer vision and advanced artificial intelligence-based algorithms to allow shoppers to fill their carts with groceries and then just walk out of the store, without engaging in any checkout process. Payments and receipts are settled digitally.

To do this, the company applies its algorithms to ceiling-mounted cameras that can then automatically track shoppers’ movements and product choices in the store in real-time. 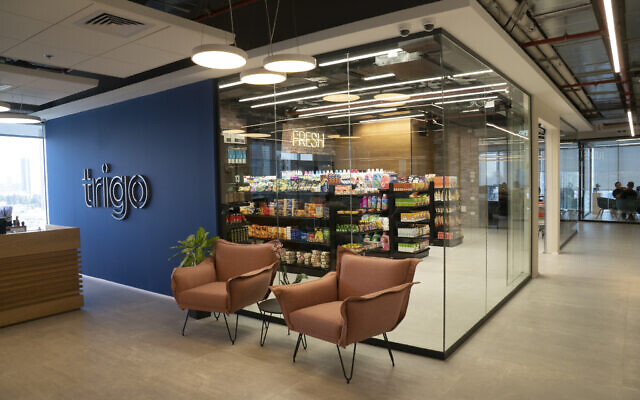 A checkout-free mini-store at Trigo’s headquarters in Tel Aviv. (Courtesy)

Trigo specializes in retrofitting existing spaces, allowing retailers to keep their unique character and layout while turning them into fully autonomous, digital stores. This gives the company an edge over Amazon’s Go technology, which also allows shoppers to simply walk out with their purchases, no checkout required.

But whereas Amazon builds new stores fitted with its technology, the cameras and sensors used by Trigo can be deployed in existing supermarkets and do not require completely new complexes, Gabay told The Times of Israel in June.

Trigo first piloted its technology with Israel’s Shufersal grocery chain, before launching a partnership with Tesco, the largest grocery retailer in the UK, followed by REWE, one of Germany’s largest food retail chains, earlier this year.

In June, REWE and Trigo announced that they had entered into a partnership to set up a new grab-and-go store in downtown Cologne, making REWE the first grocery retailer in Germany to implement a checkout-free experience under real conditions. 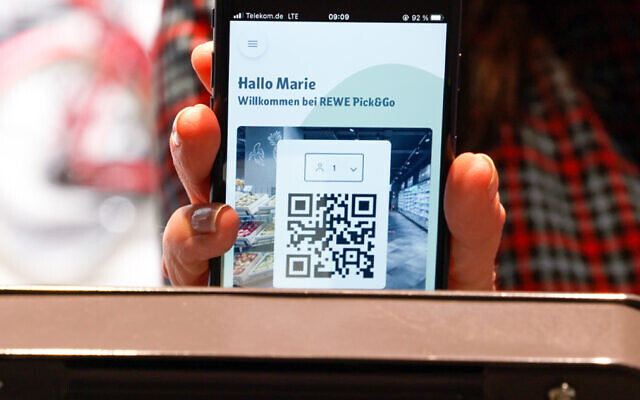 The app used by a REWE shopper in Cologne, Germany to pay for items after selecting them in-store and simply walking out. The shop is outfitted with technology by Israeli computer vision startup Trigo that allows retailers to offer grab-and-go shopping technology. (REWE)

The collaboration with Aldi marks the third public announcement for Trigo with a major grocery retailer. The Israeli startup has two more partnerships that are currently under wraps and may be made public later this year, Holtzer said.

“Trigo works with five of the ten largest grocery retailers in the world and we are particularly proud to work with ALDI, who has been at the forefront of grocery retail innovation for over a century,” Michael Gabay, who serves as Trigo’s CEO, said in a statement that accompanied the new announcement.

“With frictionless technology, the general public will be able to experience ease of shopping, while retailers will benefit from better inventory control, shrinkage reduction, as well as a positive customer service focus,” he added. 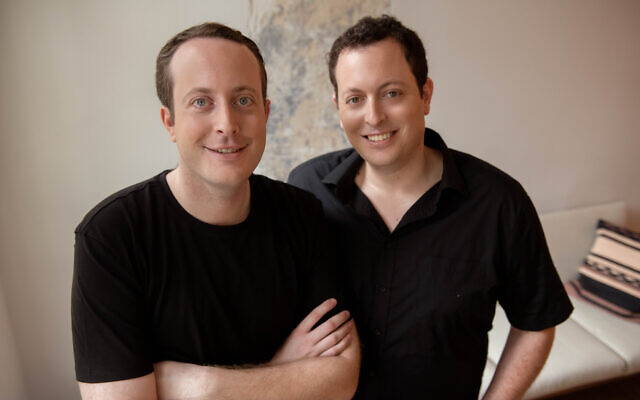 Trigo aims to have hundreds of stores set up worldwide in three years, and eventually thousands of stores, Daniel Gabay, CTO, said in June.

“It takes you years to open the first stores,” he said, but after that the next ones should follow quickly. “Artificial intelligence by nature is a learning curve, which enables exponential acceleration.”

You get Israel news… but do you GET it? Here’s your chance to understand not only the big picture that we cover on these pages, but also the critical, juicy details of life in Israel.

In Streetwise Hebrew for the Times of Israel Community, each month we’ll learn several colloquial Hebrew phrases around a common theme. These are bite-size audio Hebrew classes that we think you’ll really enjoy.

Already a member? Sign in to stop seeing this


You’re serious. We appreciate that!


We’re really pleased that you’ve read X Times of Israel articles in the past month.

That’s why we come to work every day – to provide discerning readers like you with must-read coverage of Israel and the Jewish world.

So now we have a request. Unlike other news outlets, we haven’t put up a paywall. But as the journalism we do is costly, we invite readers for whom The Times of Israel has become important to help support our work by joining The Times of Israel Community.

For as little as $6 a month you can help support our quality journalism while enjoying The Times of Israel AD-FREE, as well as accessing exclusive content available only to Times of Israel Community members.

Already a member? Sign in to stop seeing this